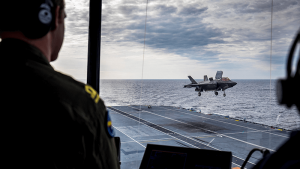 HMS Prince of Wales is the second Queen Elizabeth-class aircraft carrier commissioned for the Royal Navy and will be in full active service by 2020. The vessel has been designed to operate V/STOL aircraft, and is currently planned to carry up to 40 F-35B Lightning II stealth multirole fighters and Merlin helicopters, for airborne early warning and anti-submarine warfare.

HMS Prince of Wales has a minimum crew of 700 which will rise to 1,600 once the aircraft and their crew are also onboard. It is hard to comprehend the size of this supercarrier, currently undergoing sea trials in Scotland, which is 280 metres in length and weighs an impressive 65,000 tonnes.

We spoke to Pete Davies, Site Manager at Hythe Marine Services, about the work their team was involved with on-board. Based in Rosyth, Hythe were initially recruited to work on a ‘water-tight-doors’ project. Starting in February 2019 the team worked to ensure there were no leaks on the vessel once the ship had been released into the water. There is a certain level of settlement on any new ship when going from the dry dock to the water stage, as they are designed to move without fractures. However, this settlement does mean that the vessel can be put under different strain points throughout the boat. Once the vessel was put in the water, and the shape of certain fittings had changed, the Hythe Marine team worked to make the required adjustments, such as those made to the corridor doors, by refitting door frames and welding them securely in place.

Initially, the contract was just for these doors, but once onboard Hythe was also recruited to supply joiners to C.C.I. compartments. This involved the completion of individual sections, for example, emergency signage for exits and “way out” arrows, in case of black out, brackets for fire extinguishers, and so on.

Other tasks involved completing sealing work on the VanDam doors as the lifts for their ammunition needed to be completely sealable. Hythe used a Belzona treatment which is water repellent and breathable. The areas had to be shot blasted first, to ensure that they were perfectly clean before being treated. The HMS team is incredibly privileged to have eight people certified (and growing) in specialist Belzona treatments, as there are not many people within the industry who retain these skills. Luke Fitzgerald and Simon Pay promoted the treatment to the Royal Navy and Babcock as a strong solution to their requirements.

The team behind the skills

These tasks were governed by budgets and timescales because of the fixed deadline of the sea trials, so it was essential to have a productive team on the job. Pete’s crew consisted of four platers, two welders and two labourers. As it was such a prestigious role, some apprentices were assigned for on-the-job experience training as well, giving them invaluable insight into what it’s like to work with Royal Navy vessels.

The teams travelled to Rosyth and worked intense twelve hour days, six days per week for six weeks.  They then switched teams and had a few weeks either side as time off. Pete stressed that the ethos that underpins Hythe Marine and its team is that they go above and beyond to protect and care for their employees who often work away from home in some rather extreme environments.

The challenges of working on a sea ready vessel

Being involved in the early design stage of shipbuilding is normal practice for Hythe Marine Services, however, this project was a vessel eight years into the build, in the water and ready for sea trials.  This meant that there were additional safety factors that needed to be considered, as flammable materials were surrounding the work that they needed to complete. All the electrics were running through the ship, along with pipework for plumbing and air conditioning. There was a lot of pre-preparation required, including speaking with the other trades onboard and the HMS Prince of Wales crew, to ensure it was possible to isolate areas, and work safely, without interrupting other operations being carried out at the same time.

Hythe Marine Services is based in a Naval dockyard and therefore have a close relationship with the Royal Navy. Every Royal Navy job goes out to tender, but the combination of previous excellence in work conducted with the Royal Navy and on HMS Queen Elizabeth, the 45s and the Minesweepers, along with a highly skilled workforce, ensured that Hythe was at the forefront of this project. As a result HMS recently started work on a submarine project in Barrow based on the excellent response they received from the watertight doors project.

When you consider the size of these aircraft carriers, it will always be a work in progress to keep the vessel in top condition. The Hythe Marine teams worked hard to develop strong working relationships with the Duty Officer of the day, the  Duty Mechanical Engineer Senior Rate (D.M.E.S.R’s) and the Duty Weapons Engineer Senior Rate (D.W.E.S.R’s) to ensure tasks were carried out safely. For example isolations had to be put in place if the work to be done was ‘hot work’, electrical, or on sections of pipework to be altered and/or tested. Even though Hythe Marine work to strict time schedules and tight budgets, within this industry safety must always come first.

Ian Cockburn Senior Manager at Babcock International Group stated that “Pete is a credit to the company, his professionalism and working ethos are second to none, he gave clear and precise reports on every aspect of the work that was carried out by Hythe, especially as the packages increased. The work carried out by the site team was seen as a success story, where (once again) the success rate was maintained at a 100% pass, which lays testament to the attention to detail and the leadership demonstrated. To the point that I have made a specific request that the same team be made available for further works if requested when she is in her home port.” He also added that, “the term of endearment we named Pete with ‘Sneaky Pete’ was not a derogatory phrase, it was a reflection of how he just seemed to appear and disappear in a flash!”

So, what now for HMS Prince of Wales?

In September the vessel set off for nine weeks of sea trials and will be heading towards Portsmouth in November. Once the sea trials are done and the finished completion package is presented it will be handed over from the Aircraft Carrier Alliance to the Royal Navy.

The Royal Navy: Putting their life on the line

Pete Davies’ passion for the company he works for shines through, with him even stating “I really wish I had met Hythe Marine Services earlier in my career. The company and all the staff are great to work with”.

When we asked Pete about his passion for the job, he summarised brilliantly with a few sentences that give you goosebumps. “I’m proud to be looking after our Royal Navy, they are putting their life on the line for our country. I couldn’t serve for our country, so I make sure that I look after the people that do.They deserve a safe working life.  Myself, the team and Hythe Marine Services ensure that for them, in the work we complete for the crew and their military vessels”

What a great way to think about your working life!

Looking for a solution to a bespoke project?